The Tomato Museum at Parma

You can rest assured that maccheroni with tomato puree and tomato risotto, with the correct helping of pure cream butter and seasoned Parmesan, will become two global institutions.

These were the words of agronomist Antonio Bizzozero in far-off 1913 when he was asked for an opinion on the future of the tomato and its uses.

So we would like to tell you this story, and explain why Parma is so important for the use of these fruit.

The history of the tomato

We start back in 1500 when the tomato reached Europe thanks to the ships of the Spanish conquerors of the Americas. It originates in Peru, a fruit very widely found in the Aztec civilisation 3000 years before the Europeans arrived. It was called TOMATL at the time, a word imported into many languages and dialects before becoming TOMACA in Parmesan dialect.

The first tomatoes were small and yellow (which explains why they were called Pomodori – apples of gold), and remained like for the whole 17th century. They were seen as an ornamental plant, used to decorate window sills. Some tried to eat the leaves, with terrible results, and so people became convinced that the fruit was actually poisonous. It was towards the end of the century that the tomato established its position on the tables of the Italians, when it was suggested that it should be cooked with aubgerines and mussels. Only towards the end of the 18th century did the first starters made with filled tomatoes, fried or baked, or tomato sauces, make their appearance.

The first combination of the tomato and pasta happened around the middle of the 19th century, as far as we know from a text that mentions “vermicelli with tomatoes”. And to be even more precise, in 1835, Alexander Dumas describes pasta as white, but later around 1870 a Neapolitan writer mentions that tomatoes were essential to the recipe for pizza.

Slowly, this fruit became even more important in Italian cuisine, and across the world, and so it changes for ever.

Parma is the adopted home country of the tomato from 1800, when the countryside becomes full of fertile fields for cultivation. The first person to study its characteristics and cultivation was Carlo Rognoni at Pannocchia, a small area around 20 minutes from the city centre. Thanks to his work and experiments, he was able to create the first tomato suitable for conversation, and over time he increased his knowledge until in 1874 he founded a tomato growers’ association.

It goes without saying that the business was a huge success. The first information available, from the Parma Chamber of Commerce in 1912, describes 61 production sites active for 50 days a year and employing about 3,000 people. We should also add the scientific and technical progess of the tomato industry and the various inititatives and specialised exhibitions that are still active today. Parma was of course already known for its excellence of various gastronomic products: 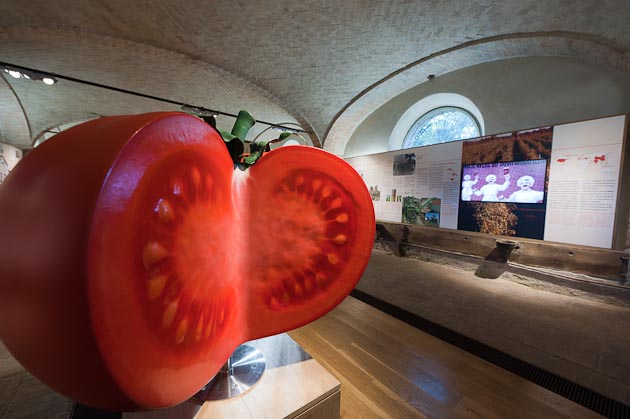 But cultivation was not enough, the important development was the working and conservation of the tomato. It was another important agronomist, Antonio Bizzozero, who created the chance for various companies in our area to become over time and up to today huge industrial companies in tomatoes.

Who? Mutti, Rodolfi, Pagani, Pezziol alongside the metal-mechanic industry that developed the machines to work the tomatoes and conserve them.

The Experimental Station formed in 1922 for food conservation was a vital step: it was a large laboratory involved in research and development. Another successful invention came in the 1940s, with the first Exhibition of Food Conservation, a showcase for the sector across the world (the modern equivalent would be CIBUS at Parma).

Totday, Parma exports its tomato products across the world, both the conserve itself and the technology, so creating a genuine excellence in food production, in the working of the tomato, and in food industry equipment.

Since the end of the 19th century, the food conservation, production and working industries have been strategically vital for the Parma area. In particular, the area between Ozzano Taro and Collecchio, has the largest documentation regarding historical food conservation, and in fact it is right now that the largest-scale production occurs. It is therefore no surprise that the Museum of the Tomato is located in our region.

Opened in 2010, at the Giarola Court, an ex-monastery with a court and church inside, the Museum is located half-way between Fornovo Taro and Ponte Taro. It also hosts the Museum of Pasta, plus the HQ of the Regional Fluviale Park of the Taro. An area rich in culture and buried deep within nature: in fact there are Roman finds along the path of the ancient Via Francigena.

What does the Museum offer?

The Museum’s displays are divided into 7 themed sections, each full of interesting information and points to note: the world of the tomato is told via panels, photos, tools and monitors. This is a journey of discovery of the history of a fruit, that despite its simplicity, has greatly enriched the history of Parma.

At the entrance, you find a huge model of a sliced tomato, which explains the botanical classification of the tomato, and its nutritional values.

This describes the conservation industry, from the simplest conservation methods, such as sun-drying, to glass jars and later cans.

Thsi section is dedicated to the tomato factory: here you can follow the transformation of the fruit, from washiung to can filling.

Dedicated to different products connected to the world of the tomato, from strange packaging to the very interesting displays of boxes and box-openers.

This section describes the growth of the mechanic industry in relation to tomatoes, and the large companies involved, from the first Exhibition of Food Conservation held in Parco Ducale in Parma from 1-20 September 1942.

Entirely devoted to the people who do the hard work, the workers who fill the factories in various jobs. This includes old jobs like the weigher or the, stoker. In this regard, we should also mention the fundamental role of women: it was female employees who were hired to inspect the tomatoes on the 5-6m transportation belt.

A special section devoted to objects of every-day life related to the tomato, such as the shiny and happy adverts for the tomato, famous painting, sculptures and stamps.

The Tomato Museum is in the Giarola Court, Via Giarola 11 in Collecchio (PR) and is part of the Food Museums network. For more information, please visit: www.museidelcibo.it

Fellow campers who want to see the Museum can park inside the large car-park of the Court of Giarola, where an overnight stay is permitted, but please note that the Court does not offer discharge facilities or power supplies.