The Lock Museum of Vittorio Cavalli

The Lock museum is a collection unique to the whole world, dedicated entirely to the private collection of Vittorio Cavalli, and where the stars of the show are nearly 6,000 padlocks.

This passion started in 1943, when Vittorio lost a padlock lent to him while on national service, during a bombing raid. From that moment on, he started to wander the world collecting padlocks, and hoping to find the one he lost.

You could say that both Vittorio Cavalli and the museum, with its stories and its own world, can explain in minute details the entire collection of 6,000 pieces, that range from the second century CE to modern examples. But we met Vittorio, by now 94 years old, in his “kingdom” amidst the padlocks, and we asked him to explain the origins of this collection:

It all started on January 4 1943, when as a carpenter, I had built a deck chair for an old man who had asked me to construct it for his wife. When he came to collect it, he saw me polishing my new tool box: “nice”, he said. “Yes, but no lock!”, I replied. “Wait a minute”, he said, and went out, coming back soon after with a padlock which closed with a French-style combination.

I agreed that I would return it to him after the war. But on 2 September 1943, I found myself in Trento, and a huge bombing raid on our barracks swept everything away, including my tool-box. I could not find the padlock and so I could not return it. From that moment on, I decided that I would collect all the padlocks that I happened to find.

This search has now lasted over 70 years, and on 5 May 2001 it became the theme of a museum, the only one in Italy that only deals in padlocks. It is the largest collection of padlocks in the world, and you can find it Cedogno, about 36 km from Parma.

The story is the reason why Vittorio began this collection, but the beautiful thing is that he knows the history of every padlock on display and the use it was put to, how he came by it, and the combination to open it!

It’s easy to say….. easy? Come to the museum and see with your own eyes the entire collection and you will realise that it is not so easy after all. 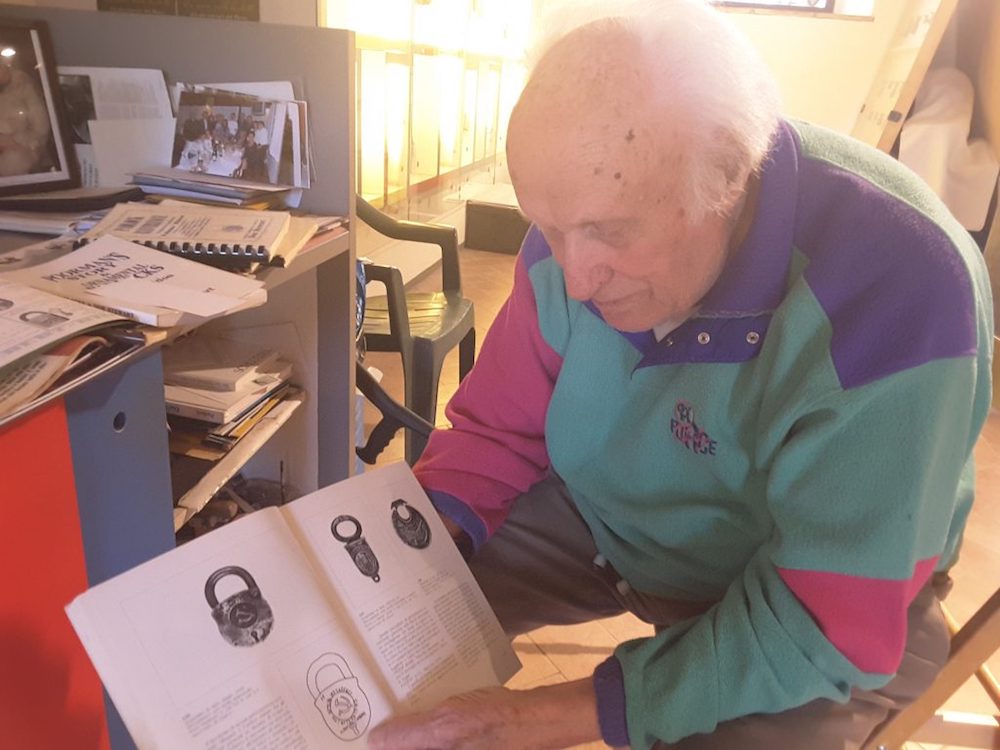 Not all the padlocks are currently on display, and in fact Vittorio showed us a cupboard from which he removed a simple plastic bag from dozens like it. He took out a padlock, and we were immediately transported to our childhood, when we would listen to a new story of our grandfather, with lively and curious eyes.

“See…”, he said as he carefully cleaned the padlock with a cloth, “this comes from Rajasthan”; he opened it, and started to tell us how he came by it, and what purpose it had served.

Then another bag, and another padlock, this time a chastity padlock, and again he told us the story. This went on until he produced a five-key padlock, a mystery that we tried to resolve, but without success.

But the nicest thing is that Vittorio, and you can grasp this only talking and listening to him, has a very unique relationship with the padlocks. He does not just display them, we think this is a form of art.

Each padlock he comes into possession of is put back into use: kerosene, degreaser, he cleans it, oils it well, and then he thinks how to open it. He looks for the correct key, he finds it, he guesses the correct combination and other devilish trick to prevent opening, and he always finds the way.

We are very grateful above all to Vittorio Cavalli and Stella Mei for welcoming us, and showing us a small part of this collection; Stella has followed Vittorio for many years, with love and sweetness, and she made us feel not like visitors but like guests.

Visit the Museum website to organise your visit, but we do recommend a phone call first: Vittorio will always find time for you, but he is now 94 years, and he is still out looking for more padlocks, so you might not find him.

You can go with your camper, the parking is directly in front, but do tell the Museum that you are travelling by camper.