The Castle at Bianello and the ghost

There are many castles across Emilia that you can visit, and many that are still inhabited by ghosts, like the Castle at Bianello. Are you brave enough to take the guided tour and sense its presence without fear? We will start by explaining that we are on the first Reggio hill 30 minutes drive from the city, and then we will take you to Bianello, where even today, there seem to be unquiet presences. There is a picture that shows a mirror with a dame reflected in it, proof of the existence of the spectres, that was taken by a tourist during a guided tour.

we are in Quattro Castella, a peaceful village in the green hills that come to life in spring. The town has four hills: Monte Vetro, Bianello, Monte Lucio and Monte Zane, with as many castles, but only Bianello still retains its intact complete interior. These are the lands of Matilde of Canossa, Imperial Vicar of the Holy Roman Emperor Henry V, known across the Medieval age for her culture and important role in the investiture struggle between the Papacy and the Emperor.

Pope Gregory VII and Henry IV stayed at the Castle at Bianello, anbd the latter is famous for his “humilitation at Canossa”, when he remained outside Canossa for three days in bare feet, as he waited for his excommunication to be lifted. The Castle is inside the splendid LIPU Oasis, a Council project, and in which there are many nature paths: there is a tourist information centre open all weekend from 9am-6pm. For more information, you can call (0039) 0522-887904.

The castle is open from spring to autumn, but it is closed in winter. You can book a tour with Ideanatura who will guide you through this spellbound and mysterious place. The only entrance is in a slope across the Oasis, to the entrance gate. The path is gravelled and offered magnificent panoramas: there are also many benches to rest if you get tired during the walk. Past the gate, on your right is the ex-Oratory of San Giovanni, with the ticket office inside. A few steps, and you are in the castle terrace, with splendid views towards your right. 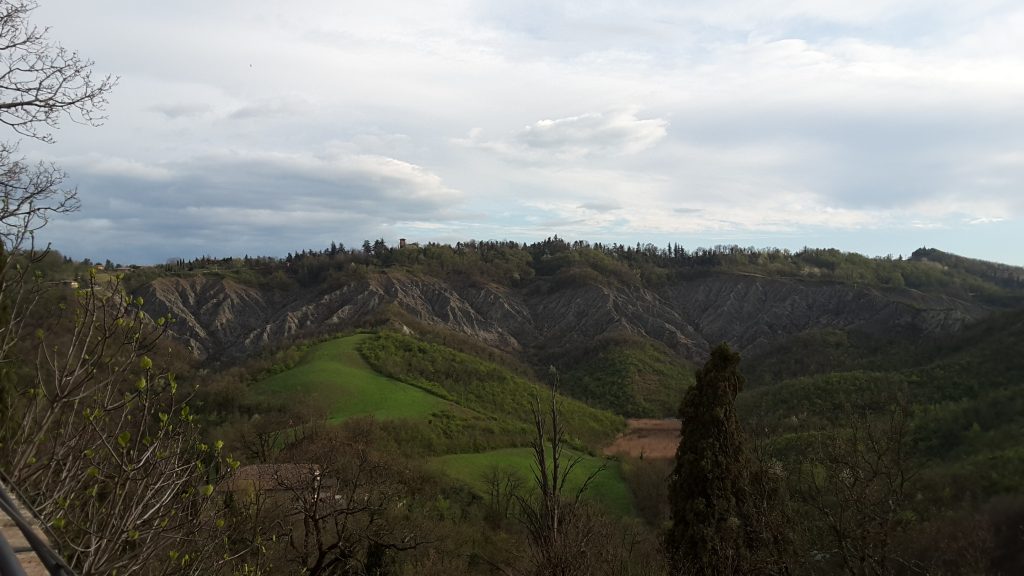 Geologists will tell us that these are made from sharp pieces of clay earth created by land erosion. Legend however tell us that they are called the “devil’s scratches”: such was the power of Matilde of Canossa, that the Devil himself was forced to accept that he could not defeat her, and he scratched the rock with his hooves, leaving the marks visible today. Maybe this is not true, but we definitely know that Matilde was a religious and influential woman. We are sure that these furrow marks would not allow the enemy to climb up, or form a road to render the most sanguinary Medieval battles even more inflamed. 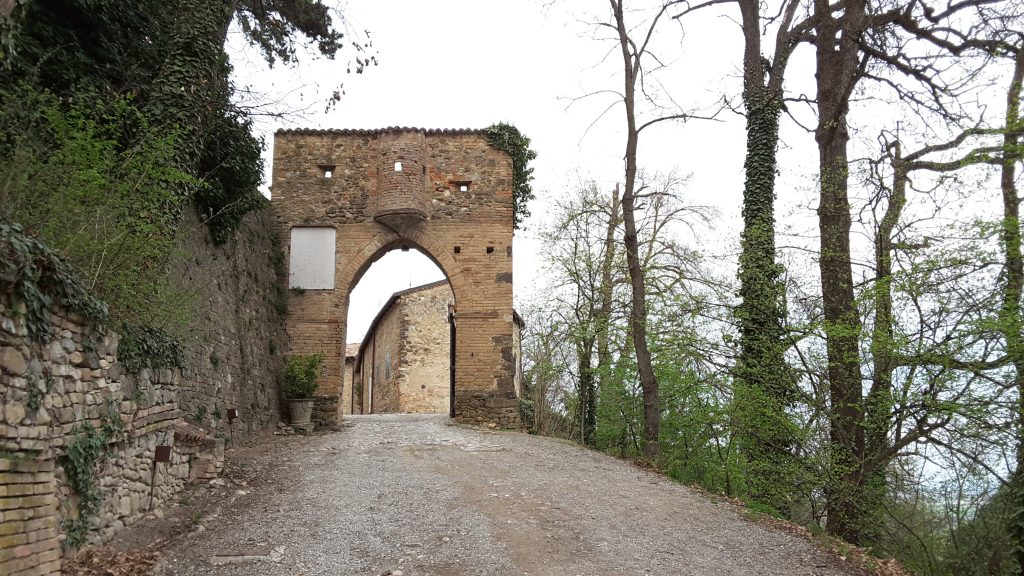 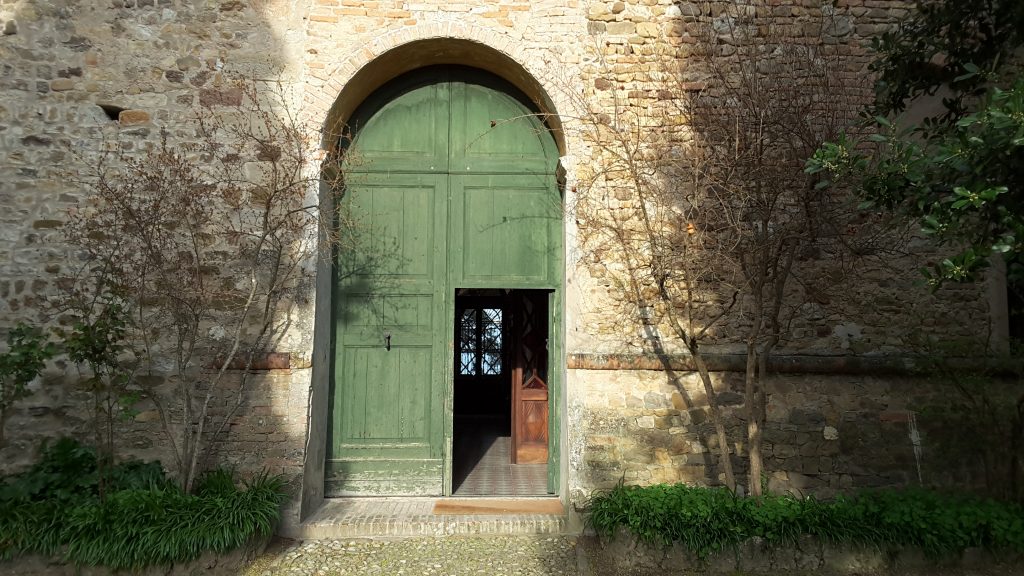 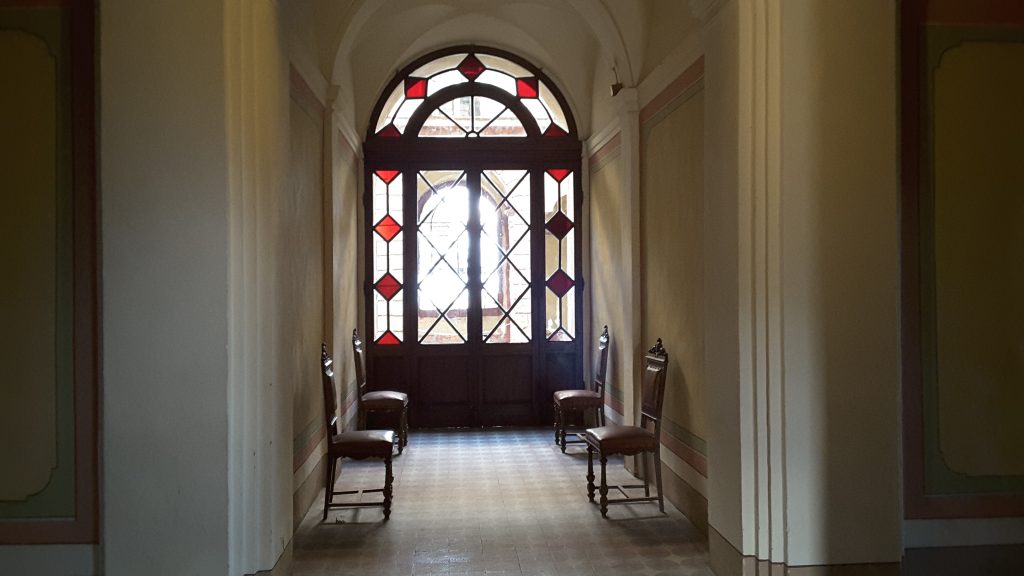 The entrance opens onto a corridor, and you will notice a magnificent glass door and some seats, as if someone is waiting for you. Go up the slope to the frescoed furnished apartment. Lovers of visits to castles will not help but think how many speeches these walls have heard, and how many important decisions were taken here. Next is the dance room, bedrooms and in one of these, you can find the mirror where the tourist photographed the reflection of the dame. The photo exists, so there is no doubt, the ghost materialised! 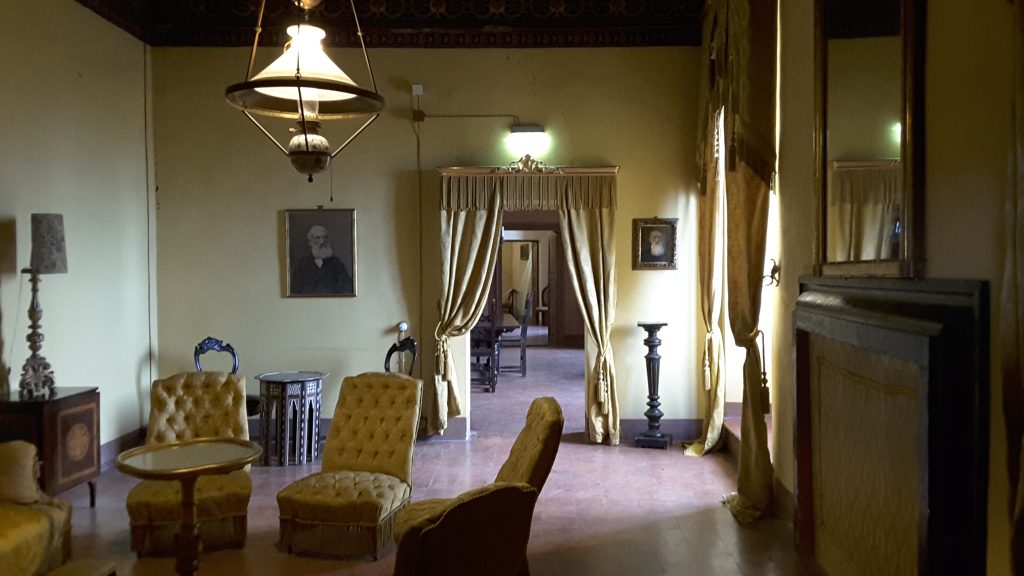 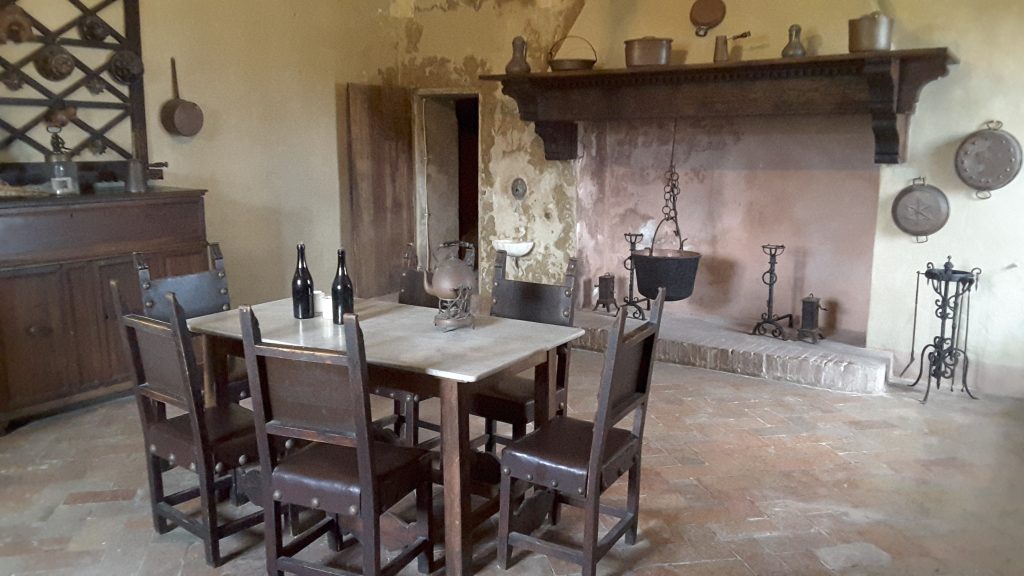 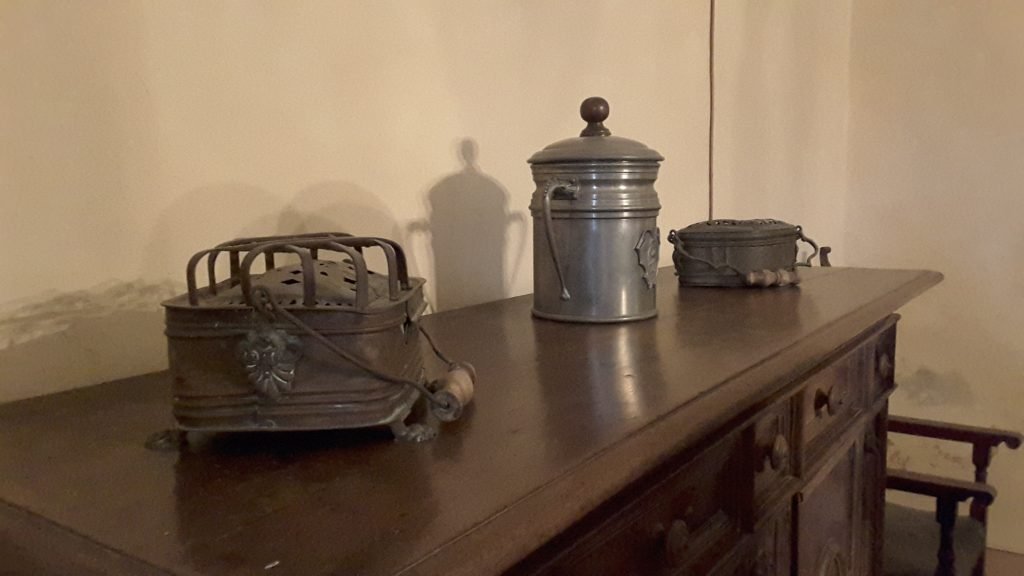 We continue onto the restructured kitchen with its everyday objects from ancient times. The “trompe l’oeil” on the walls and doors are beautiful they create the sense of an even bigger panorama. The view from up here is splendid, as are the kitchen objects. The original floor and chapel remind us how religious Matilde was and devoted to the person of the Pope.

The end of the tour, and we head back to where we started, the staircase and the glass door. A fantastic view that tells us of a woman who was exalted as a saint, such that she is only the female saint to be buried in Saint Peter’s in Rome. Some denigrate her, suggesting that she was the Pope’s lover, but others portray her as a feminist icon, given her importance for the history of the era. This castle is one of her symbols, and there are many others like it between Reggio Emilia, Mantova, and Lucca. It is said that Matilde lost a bet with the Pope, asking him for 100 churches and hostels but only receiving 99.

The historical representation held at the Castle at Bianello towards the end of May is unmissable: the historical moment when Matilde returned Henry V his power. Please click here for more information

How to reach Bianello by camper:

Leave the motorway for Quattro Castella, and choose from two rest-areas:

Please click here for more information on visits. We would also suggest that you have lunch at the restaurant next to the Castle, which again opens from March onwards. Here you can enjoy typical products from the area, and so taste gnocco fritto, cold cuts, and quality Lambrusco alongside quality traditional Reggio first courses