One of the principal cultural attractions of the city, the Teatro Valli of Reggio Emilia opened on 21 April 1857. Even today, it remains one of the most important attractions at a national level, a temple of culture that hosts theatre work appreciated by people from the city and beyond. Here is some advice for a visit:

On the night between 21 and 22 April 1851, a fire completely destroyed the very popular Cittadella Theatre, that dated back to 1741. It had been very important for the city, hosting important operas and shows on two specific annual occasions: the Carnival and the Fair of the Madonna of Ghiara. Attempts to find an alternative location for the show already planned for the opening of the Fair failed, and so a Modenese architect, Cesare Costa, was given the brief of creating a new theatre. Initially called “Teatro Comutativo”, it was renamed in 1980 after the famous Reggio actor Romolo Valli. 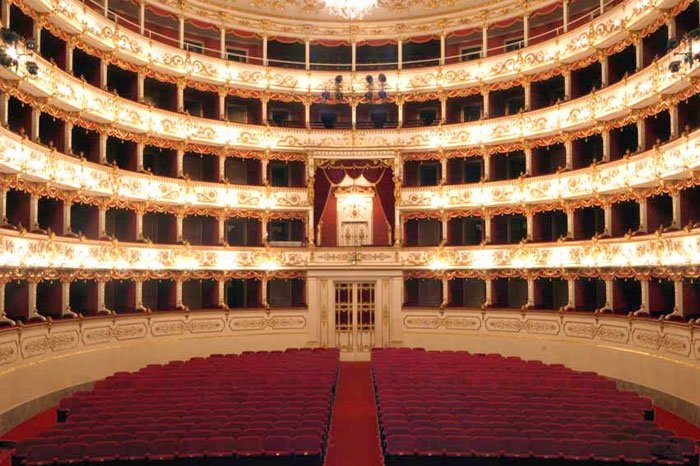 Our visit to the Valli

The first atrium is the vestibule, dedicated with two busts to Cesare Costa and Achille Peri, famous Reggio composers. The first thing that strikes you is the almost blinding light that reflects off the marble. Next we have the real atrium, notable for its long octagonal shape: here again, there are two busts dedicated to famous Reggiani, Pariati and Fontanesi. The vaults have twelve larger spaces and four smaller ones, and side staircases that lead to the stage and the entrance hall. We make our way into the “Room of the Show”, also known as the Platea: the vault is made of 8 painted medalions painted by Domenico Pellizzi that celebrate the glory of Italian theatre, the melodramma, the tragedia and so on. There are four orders that surround the room and at its centre, between the first and second, is the entrance to the elegant Royal Stage.

We then turn our attention to Boccascena (the stage) and above it we find the clock, still functional with its manual winding action that lasts only 24 hours, wound via a mechanism specifically placed in a little room between the stalls and the Painters’ Room. Above our head is the Astrolampo (chandelier) which is 3.75m tall with a 3.05m diameter and 72 lights. One interesting fact: the chandelier was the first in the city to use gas with a specially-built gasometer, so replacing the oil or candle lights typical of the era.

There are three curtains:

Next we have the very wide stage, one of the largest in Italy, 20m deep with a proscenium of nearly 14m; the internal measurement is 22.5m. The original wood floor (in spruce and durmast) inclines 5 cm. We also found out that the theatre is equipped with various machines needed to create scenic illusions:

For more information, please visit the official website. Parking is easy in Foro Boario and there is also a small shuttle bus that takes you direct to the side of the Theatre itself.