The Food Museums at Parma – Official Museum of the Region of Emilia-Romagna – are a range of spaces dedicated to the classic food products of the Parma region, a project that aims to conserve and promote our gastronomic traditions that have now become a genuine national treasure.

Some of the current museums in the Food Museum range are:

Parma is known as the “little Paris”, a city of aristocratic traditions of culture and music, rich in monuments and precious art works, but it is also the capital of good cuisine and quality food.

And so the superb foods of the Parma region, such as Parmigiano Reggiano, Parma ham, Salame from Felino, tomato conserves, pasta and wines all find a special place in these Museums, that recount their history, and seek to celebrate and promote these food treasures.

This Museum is located in the historic 19th century castle at Soragna, in the shadow of the Rocca Meli-Lupi, in the province of Parma, a few metres from the town square.

The Castellazzi Court, home of the Parmigiano-Reggiano Museum, is made up of the colonic house with a stables and hay-shed, and a round-shaped columned dairy. Inside you can see the instruments and tools used to make this King of Cheeses. The classic authentic Parmigiano-Reggiano classico is the most pretigious of all Italian cheeses, loved across the world, and has ancient origins. Over 120 objects and 100-odd historical pictures, designs and photos illustrate the production of Parmigiano-Reggiano in the dairy.

You can also see some of the foreign fake imitations of Parmigiano-Reggiano outside, along with tools and every-day objects from the life of farmers related to food production. 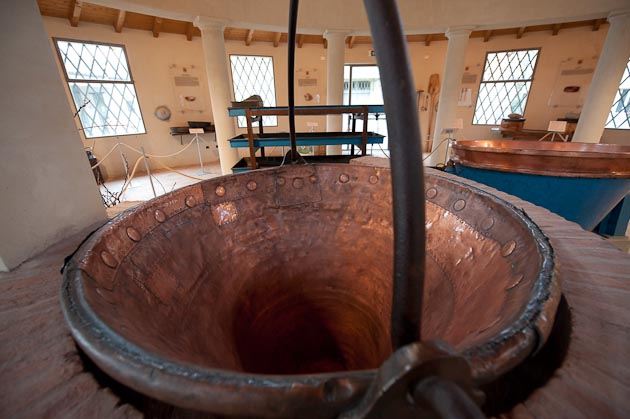 The entrance is via the pedestrian path in Viale dei Mille

Open to the public from March 1 to December 8.

Inside the stunning medieval agricultural court at Giarola (in Collecchio), you can see the Museum of Pasta, on the right bank of the Taro river.

The classic dry hard-wheat semola pasta, of Eastern origin, found its true home in Italy, developing over the centuries in different parts of the country: in Sicily, in Liguria, in Naples and Bologna.

The Barilla company, today a world leader in the pasta sector, started its activity in Parma in the 19th century, and playing a fundamental role in the creation of the museum, which is divided in ten sections covering history, technology and culture. We learn many details and features of the wheat, how it is cultivated and finally we learn about the tools used and the milling process. 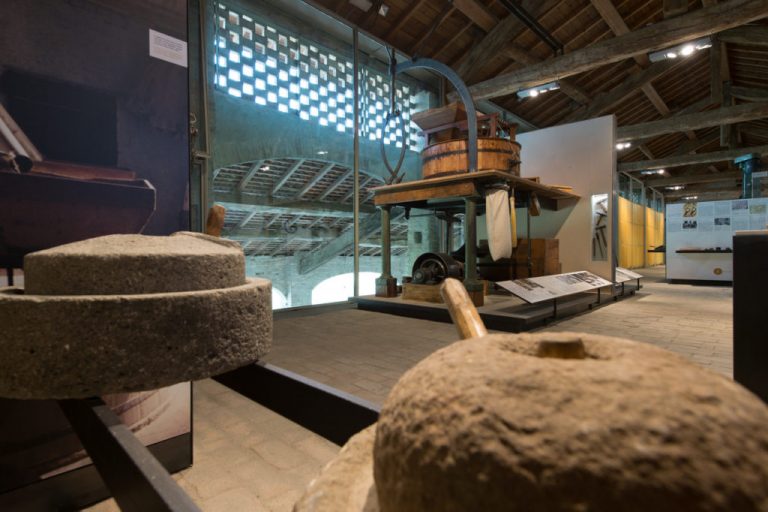 Apart from a second collection of ancient machines, you also see the production methods in a classic artisinal Emilia laboratory. You can see models and watch videos, so that you can learn about the most modern technologies and methods used in industrialised pasta production. We also learn how more than 100 different shapes of pasta are made, and space is also given to the no-less significant aspect of publicity and communication regarding pasta, with historical posters and flyers.

Finally, we have a consideration of pasta in art and culture – from painting to stamps. This completes a very rich exhibition that should end with a vist to the below-mentioned Tomato Museum, that explains its history, transformation and cultivation, typical of the Parma region.

Famous for its South American origins, the tomato actually found its most fertile terrain in Parma, starting from the second half of the 19th century. This did not limit itself to cultivation, but included the working of the tomato, so that now Parma exports across the whole world not just its tomato products, but also the preservation methods used in the process.

The Museum is based inside the Corte di Giarola, along with the Pasta Museum. Organised in 7 themed sections, it describes the history of the tomato from its arrival in Europe to its spread across the continent, the various types available and its nutritional qualities. It also recounts the development of the transformation process and its importance to the economy of Parma: from the original dry product to concentrates and purees, from ready sauces to tomato juice for drinking.

The development of production technologies is very important, as is consideration of the finished product and packaging, with various cans and tubes used over the decades on display. The final part of the museum is the “Tomato World”, with posters and adverts for tomatoes, famous quotes, sculptures and tomato-based recipes, until we reach gastronomy, and the marriage of the tomato with pasta and pizza. 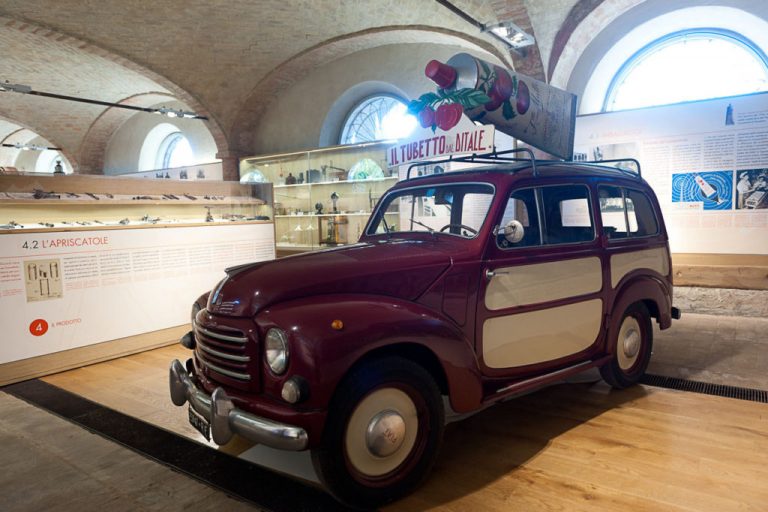 The Ham and cold cuts Museum

In a fertile region marked off on the north by the Po and on the south by the Appenines, that includes the valleys of the Enza and Stirone, pig breeding has been practised from the earliest recorded times, made easier by the huge forest area and the presence of oak trees and so acorns. Huge herds of pigs pastured in the woods and the local people – of Celtic origin – who settled in this region started to perfect the methods needed to use the meat and preserve it.

Again the natural features of our region play a fundamental role and so it is appropriate that the Ham Museum is right here: at Langhirano, the undisputed world capital of ham, in an completely-restructured complex in the ex-Foro Boario, a splendid piece of rural architecture from the early 19th century, which was used in the past for the trade in animals. 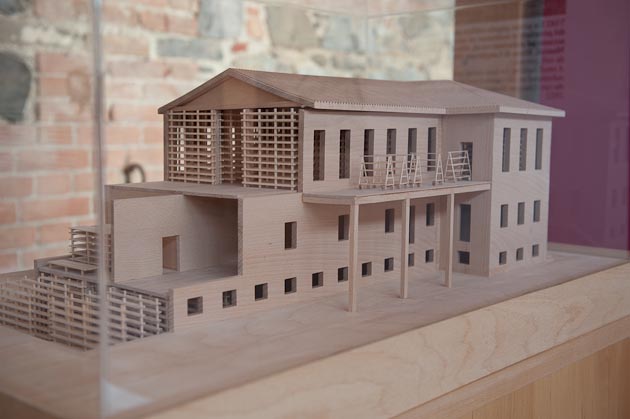 Langhirano is a an oasis of peace, with a gentle climate, with evocative vineyards the magnificent Castle at Torrechiara, high up on the hills, with its imposing walls, 14th century village, elegant court, beautiful kitchens and frescoed bedrooms.

Divided in 8 sections, a visit to the Museum begins with our region, a description of the agriculture of Parma, before passing to sections about types of pig and salt room, where the history of this vital food preservation mineral is laid out, and which thanks to the wells of Salsomaggiore, favours the development of the ham industry. The fourth room is the butchery, gathering together historical documents on the work of th butcher over time, and featuring many ancient objects used in the trade.

The final sections focus on the typical cold cuts of the Parma region, gastronomy, ham working methods and the Parma Ham Consortium which protects the quality of this extraordinary product that is appreciated across the world.

The first documented reference to salame in the Parma area dates back to 1436, when Niccolò Piccinino, serving the Duke of Milan, ordered the purchase of “twenty pigs to make salami”. This is one of the documents that we can see in the Salame at Felino, witness to the special relationship built up over time between the unique product that we know today and its area of origin, plus the bas-relief scratched into the pink marble at Battistero by Benedetto Antelami, and accounts of sumptuous Renaissance banquets at the Court.

The Salame Museum at Felino is located inside the evocative cellars of the Castle in Felino. Built in 890 by Marquis Luppone, it was extended and fortified over time, reaching its epogee with Pier Maria dei Rossi. Passed from the Pallavicino family to the Sforza and then the Farnese, the ancient castle dominated the valley between the Parma and Baganza rivers, and today includes a superb restaurant. 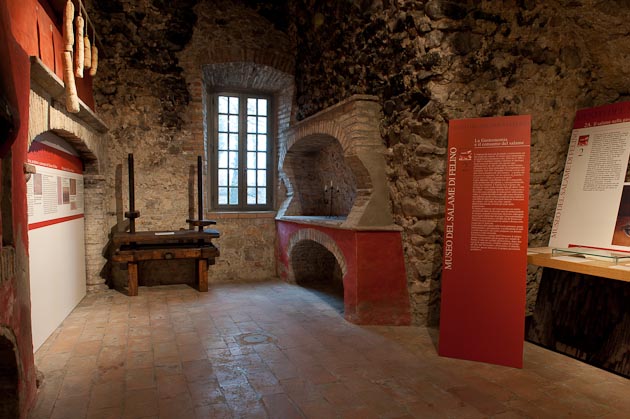 Organised in 5 sections, a visit to the Museum starts with historical accounts of the relationship between the town of Felino and the product it is best known for.

The second section, devoted to gastronomy and located in the kitchens, is dedicated to the gastronomic use of the salame in Parma, a unique example of synergy between food production and consumption in an agricultural company of the 17th century. The large room hosts the section relating to the work of the butcher and home production of the skin “sack”, featuring a wide range of objects used by butchers and housewives alike.

To finish, the next room tells us the story of production technology, describing its salient features from the earliest period up to the modern era, with its “ID card”, added to the IGP list of the EU in 2012 (protected geographic area of production)

in the middle of a region that has produced wine for centuries, in the splendid cellars of the Rock of Sala Baganza, you can today find the “Cellars of the Museum of Food”, a museum entirely dedicated to the wines of Parma, their history and culture.

Wine production dates back to pre-historic times, was already well-developed in Roman times, and has had an important cultural impact on the Parma region. This is explained in 6 different sections in the Museum.

The first, set up in collaboration with the National Archeological Museum, is devoted to the archaelogy of wine in our area, displaying tools and pictures from the excavations carried out in our region. The second room deepens our knowledge of the vine as a tree and of grape growing, following the development of this cultivation across the Parma region. 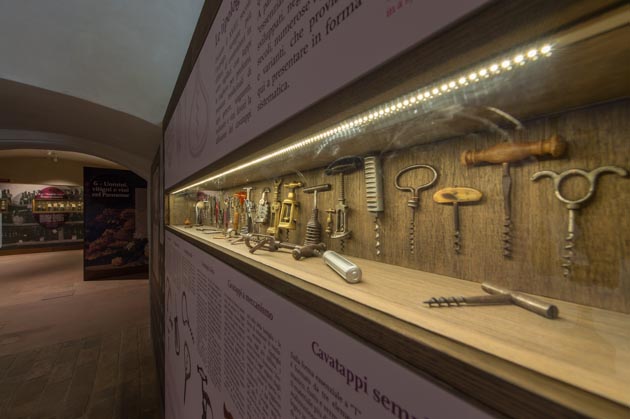 In the third room, we have tools and ancient objects used for grape-gathering and wine preparation, with pictures and documents that recount the history of wine in this area.

Descending into the fascinating Renaissance ice-room is an engaging experience: 360° pictures show us, in the middle of the museum, the role of the vines and wine in ritual, history and art, part of a thousand-year old culture rich in traditions. After a pergola of vine plants, we come into the bottle room, where we learn the history of the containers used for the wine, and the trades connected to them: the casketmaker and the glassmaker. The sixth room features the fruits of Parma wine production: the pioneers of the sector, the history of wine labelling, the different grapes produced (perfect alongside the excellent cheeses and salame of the region), cellars to visit in the area, and the role of the Wine Consortium of the Hills of Parms that protects the quality of a product that is constantly growing in importance.

You can visit each of these museums via camper, and you can find more information on rest-areas in the Rest-Area section of this website.