We would like to offer a camper trip in Val Trebbia and Val Luretta, a trip of a few days that will take you through valleys and castles, ancient towns and superb gastronomy and nature. We left from Parma, with first destination in Grazzano Visconti, but you can just as well leave from Fiorenzuola or Piacenza. 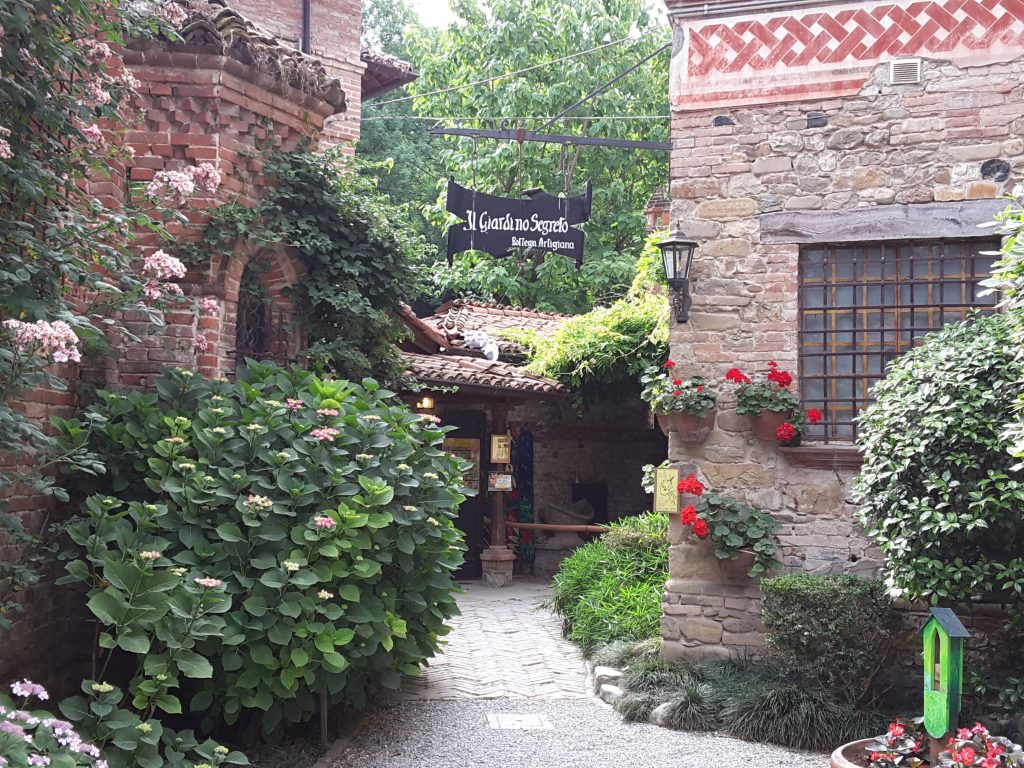 Grazzano Visconti is known across Italy for its architecture, particularly the extensions made to the town by Giuseppe Visconti of Modrone at the start of the 20th century. Known as a “cultured man of refined taste and very clear ideas” (Primo ‘900), count Giuseppe brought into his project the architect Alfredo Campanini (born in Gattatico in Reggio Emilia in 1873, but Milanese by adoption). Their partnership turned out to be perfect, as within just two years (1905-1906) the urban layout of Grazzano Visconti was transformed.  What had been a few crumbling houses was turned into a fascinating medieval setting. Creating new houses, a school for arts, artiginal workshops and shops, the Wax Museum, the Museum of Torture and much more, Visconti and Campanini created a genuine jewel of the province of Piacenza. It is pleasant to visit and walk around, especially during the numerous historical renactments organised each year such as the  Corteo Storico.

How to visit Grazzano Visconti

Grazzano does not have an equpped rest-area: there are two carparks suitable for campers (that cost €12.00 per day), and an area for campers not far from the town.

Leaving Grazzano Visconti, turn right onto SP35 towards Roveleto Landi, a town that used to belong to the Landi family: from here we turn right onto SP28 following the signs for Rivalta Trebbia and crossing the bridge at Tuna; turn left owards the Castle of Rivalta and suddenly you will see a monument. This marks a warzone that dates back to 218 CE! During the winter that year, the inhabitants of the lower Trebbia valley saw a multi-ethnic army advance down their gentle hills into the valley, made up of north-African and Libyan troops, Numidians cavaliers and others. In their midst was an unknown animal, large, hairy with a long trunk and tusks….it was the army of Hannibal, the Carthigian general looking to maintain a promise made to his father Amilcare, to defeat the Romans and put an end to their expansionist aims in the Mediterranean. The information panel next to the monument explains all the phases of the cruel battle that followed.

Stage three: the Castle at Rivalta

And now Rivalta, a beautiful town dominated by its majestic castle. The castle is an imposing fortified complex, first noted in historic documents in 1048CE, which became part of the estate of the Landi family in the 15th century. The current branch of the Landi, the  Conti Zanardi Landi, still own the land today.

You can visit the court, the salon of honour, the lunchroom, the kitchen (in copper), cellars, prisons, bedrooms, tower and the armsroom (dedicated to the battle of Lepanto), the gallery, the biliards room, the Museum of Military Costumes and the  Museum of the Scared Arts. Visit the section of the Castle of Rivalta in the site of the Ducal Castles. You can park in the convenient carpark at the feet of the castle, but it is not equipped.

Leaving Rivalta, we now take the SP40 towards Piacenza following the signs for Gazzola, the area of Piacenza richest in castles and locations of historical events.

You should see: the castle, towards home of the town council, and the church of San Lorenzo;

We head towards Agazzano where we will stop to visit the castle. There is no dedicated camper rest-area, but you can park in the carpark near the Castle.

The Castle complex is made of two structure and a large garden-park which overlooks the Luretta valley. The Rock represents a refined combination of the classic medieval defensive architecture and the elegance of the Renaissance ducal dwellings.

In the the summer the castle became the residence of the ducal family at the end of the 18th century, the furniture is original and the castle features splendid frescos and precious furnishings.

Unfortunately, when we came, the castle was closed, so we decided to go around on foot to take pictures, before starting off again. We should have known actually, since we travelled on Ferragosto (mid-August bank holiday) when many places of interest are generally closed. We suggest checking beforehand, to make sure that it is open for the guided tours. For more information, check the section on the Castle at Agazzano, at the website of the Ducal Castles.

We head for Momeliano on the SP46, and we head into the Luretta Valley, which sits between the Trebbia valley towards the east and the Tidone to the west. It starts with Mount Serenda (759 metres) where the two valley meet and extends into a hilly zone down to the Padana plain, where the river of the same name flows into the Tidone.

The road is not busy but somewhat narrow, and can be difficult to pass in some points, even if this is primarily an agricultural area. You can therefore choose instead to go down into the Trebbia Valley from Gazzola towards Rivalta before heading for Travo). But whichever road you take, the views of Piacenza and the Padana are truly special, full of vineyards and farmhouses. So we head down into the Trebbia, and we stop for lunch at the junction that leads to the SP40 towards Travo.

We enjoyed splendid Piacentine fare, especially “la picùla”, and an excellent Sauvignon of the Colli Piacentini, produced here in the Luretta Valley. After eating outside (essential in the August heat), we get back onto the camper and start out again.

Travo attracts many people mainly for its park, the Archeo Travo, an archaelogical Museum and Park, where you can visit the Archaelogical Museum and Neolithic Village; there are also many activities and events to enjoy, and many are perfect for children. There is a large, but unequipped, carpark. For more information, visit http://www.archeotravo.it.

To be honest, we could carry on endlessly through the Piacentine countryside, but we decided that our final stop would be Bobbio. We stopped in the camper rest-area near the town centre. The town is very welcoming, characterised by narrow streets and alleyways. Above all, the town is stepped in history, particularly the story of San Colombano, the Irish monk who started the town’s abbey, which was an important stop for medieval pilgrims.

Another interesting but totally different location in the town is the Malaspina dal Verme Castle, a superb fortified structure, which features the Marina rooms, and frescoed walls and stucchos. Unmissable! Please visit the Castle website for information on guided tours.

This has been a trip through hills and vineyards, castles and small town, a voyage into the countryside and its culture. This itinerary takes you through the Trebbia and Luretta Valleys, jewels of the Piacentine countrside, perfect if you are looking for peace and quiet, and somewhere different to spend a few days.

It is perfect for families, and would suit people who love culture and food and good company, but also simply relaxation and new places to explore.

We hope that you enjoy it as much as we have!